China's Chang'e-4 lunar probe was launched in the early hours of Saturday, and it is expected to make the first-ever soft landing on the far side of the moon.

A Long March-3B rocket, carrying the Chang'e-4 lunar probe including a lander and a rover, blasts off from the Xichang Satellite Launch Center in southwest China's Sichuan Province at 2:23 a.m. on Saturday, December 8, 2018. [Photo: Xinhua]

A Long March-3B rocket, carrying the probe including a lander and a rover, blasted off from the Xichang Satellite Launch Center in southwest China's Sichuan Province at 2:23 a.m., opening a new chapter in lunar exploration.

Since the moon's revolution cycle is the same as its rotation cycle, the same side always faces the earth. The other face, most of which cannot be seen from earth, is called the far side or dark side, not because it's dark, but because most of it remains unknown.

The Chang'e-4 mission will be a key step in revealing the mysterious far side of the moon.

"The soft landing and exploration of the far side, which has never been done before, will gain first-hand information about the terrain and lunar soil components and other scientific data, which will help enrich our understanding of the moon and the universe," said Zhang He, executive director of the Chang'e-4 probe project.

The scientific tasks of the Chang'e-4 mission include low-frequency radio astronomical observation, surveying the terrain and landforms, detecting the mineral composition and shallow lunar surface structure, and measuring the neutron radiation and neutral atoms to study the environment on the far side of the moon, the China National Space Administration (CNSA) announced.

China has promoted international cooperation in its lunar exploration program, with four scientific payloads of the Chang'e-4 mission developed by scientists from the Netherlands, Germany, Sweden and Saudi Arabia.

Three scientific and technological experiments, designed by Chinese universities, will also be carried out during the mission.

Nobody had ever seen the far side of the moon before the Soviet Union launched the Luna 3 probe in 1959, which was the first-ever mission to photograph the far side.

The United States Apollo 8 mission sent three astronauts to fly around the moon in 1968, the first time that people saw the moon's far side with their own eyes.

"As no astronauts or rovers have ever landed on the far side, we know little about it except for speculation based on remote-sensing images," Zhang said.

The far side is such a place, as the body of the moon shields against radio interference from the earth. From there, astronomers can study the origins and evolution of stars and galaxies, peering into the dawn of the universe.

The low-frequency radio astronomical observation will be one of the major scientific goals of the Chang'e-4 mission, said Zhang.

A Long March-3B rocket, carrying the Chang'e-4 lunar probe including a lander and a rover, blasts off from the Xichang Satellite Launch Center in southwest China's Sichuan Province at 2:23 a.m. on Saturday, December 8, 2018. [Photo: Xinhua]

Scientists hope to land the probe in an area with many geological features such as the transition zone between highlands and basins to get more scientific information.

But engineers worry about the safety of the landing and the rover, and are searching for relatively flat areas.

After careful analysis, the experts chose the Von Karman Crater, named after a Hungarian-American mathematician, aerospace engineer and physicist, in the Aitken Basin, as the landing site.

The region is believed to have great research potential, and is at a similar latitude to the landing site of Chang'e-3. The sunlight there can ensure the probe's energy supply.

However, the chosen landing area for Chang'e-4, which is a smaller crater within a larger crater, is much narrower than the landing site of Chang'e-3, and the terrain is more rugged, posing great challenges for the landing, said Wu Xueying, deputy chief designer of the probe.

"So the landing accuracy of Chang'e-4 must be higher than Chang'e-3," Wu said.

In addition, landing and roving on the far side of the moon requires a relay satellite to transmit signals.

China launched the relay satellite "Queqiao", meaning Magpie Bridge, on May 21 to set up the communication link between the earth and the moon's far side.

The satellite has successfully entered a halo orbit around the second Lagrangian (L2) point of the earth-moon system, about 455,000 km from the earth. It is the world's first communication satellite operating in that orbit, said Zhang Lihua, chief designer of the satellite from the China Academy of Space Technology.

In orbit, the relay satellite can "see" both the earth and the far side of the moon. The earth's and moon's gravity balances the orbital motion of the satellite and makes it very fuel-efficient.

A test on the satellite in November showed that it is in good condition, said Zhang.

Named after Chinese moon goddess "Chang'e", China's lunar exploration program, which began in 2004, includes orbiting and landing on the moon, and bringing samples back to earth.

The country's first lunar probe, Chang'e-1, was launched in 2007, making China the fifth country to develop and launch a lunar probe on its own.

After accomplishing its tasks, Chang'e-2 flew to the L2 point of the sun-earth system about 1.5 million km from earth to conduct scientific experiments. It was then tasked to fly by and observe the Toutatis asteroid, about 7 million km from the earth, and continued its journey into deep space.

Chang'e-3, launched in 2013, was the first Chinese spacecraft to soft-land on and explore an extraterrestrial object. The scientific instruments on its lander are still operating, making Chang'e-3 the longest working man-made probe on the moon.

China launched an experimental spacecraft in 2014 to test technologies to be used on Chang'e-5, which is expected to bring moon samples back to earth. The spacecraft re-entered the earth's atmosphere at a speed of about 11.2 km per second.

The lunar program ushered in a new era for China to explore the universe and peaceful utilization of space. 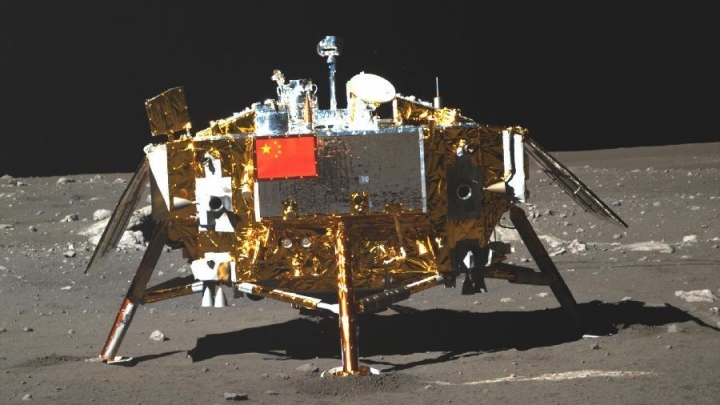